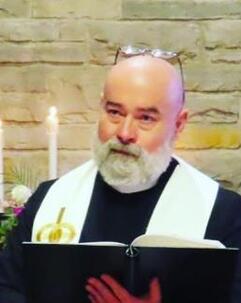 The Reverend Jeff Stevenson, HoSM  |  Rector
​Fr. Jeff and his husband Noah have come to Sayville from Kansas City, MO, where for the past two years Fr. Jeff has served as the Assistant Rector at St. Andrew’s Episcopal Church, Kansas City. Fr. Jeff left Utah at 21 to join the US Navy as an enlisted Intelligence Specialist. He had a number of unique postings including the Embassy in Venezuela, Adana Airbase in Turkey, USS Eisenhower, and an active duty recall to Washington, DC after 9/11. After his recall to DC, rather than returning home to Utah he accepted a position with Booz Allen Hamilton supporting the National Geospatial-intelligence Agency (NGA). In 2015 Fr. Jeff left the consulting world to follow a long-deferred call to ordained ministry. He attended Virginia Theological Seminary, Alexandria, VA (M.Div). As a capstone to his M.Div Fr. Jeff wrote a thesis entitled The Rite of Reconciliation in the Context of the Moral Injuries of War, he hopes to expand on his thesis and write a book on the Theology of Reconciliation particularly around moral injury. During seminary he met Rev David Peters who introduced him to the Episcopal Veterans Fellowship (he is now the Exec Director) and became a brother of the Hospitallers of St. Martin. Fr. Jeff is a collector of hobbies and self-professed Sci-Fi nerd.