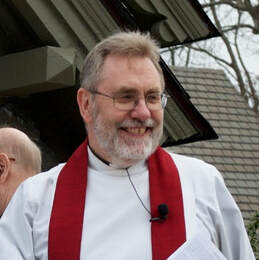 Fr. Hugh was Rector of Christ Episcopal Church in Norwich from February 2012 until he joined us as Interim Rector in December 2018. Before that he served for 30 years in the Church in Wales: as vicar in various parishes in the Diocese of St David’s. He has a particular interest in spiritual development, conducting retreats and quiet days, and has acted as spiritual director to several individuals. He was Provincial Officer for Youth and Children’s Work for the Church in Wales for 7 years and has worked for the full inclusion of children and young people in church life.

He is the author of “A Fitting End: making the most of a funeral”, a book for people who conduct funerals, and used to lecture on funeral ministry at St Michael’s College, Llandaff in Wales. He previously taught communication skills for Cardiff University’s Diploma of Pastoral Studies, and has been a personal tutor and lectured in Church History on the South Wales Ordination Course, as well as a mentor to newly-ordained clergy. He also contributed to “A Guide to Parish Youth Work” and several other publications on youth and children’s work.

​His other interests include playing chess, tai chi, walking the dog, a little gardening and making maple syrup. 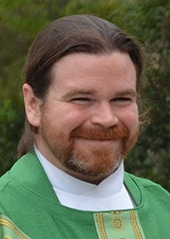 The Reverend Brian C. Barry  |  Assistant to the Rector

I was born and raised on Long Island, and spent most of my life in and around Bellmore. I graduated from Adelphi University with a Bachelor of Arts degree in English.  I've worked many odd jobs in my life, not limited to book stores, banking, mortgages, North Fork vineyards, construction, and voice-over work for television and radio.  I married the love of my life, Holly, in June of 2016.  We love camping, hiking, traveling reading, and all things sci-fi and fantasy.  Holly loves to bake.  I love baked goods. We are match made in heaven.

While discerning answering the call to ordained ministry, I spent a year (2012-2013) working with the Episcopal Mission on Standing Rock Reservation in South Dakota. During my time there, I served alongside my Lakota brothers and sisters, bringing food to the elderly, tutoring and assistant-teaching at the local school, and building an outhouse for a church with no running water.  I also assisted in the Taize Pilgrimage of Trust to Red Shirt Table on the  Pine Ridge Reservation, where I helped coordinate internal security following safe-church procedures. My favorite job, however, was helping out at Thunderhead Episcopal Camp in the Black Hills, where I got to hang out with the kids and throw water balloons at camp counselors.

In 2013, I enrolled at Berkeley Divinity School at Yale, the Episcopal seminary at Yale Divinity School. I graduated in May 2016, with a Masters in Divinity and a Diploma in Anglican Studies, where I focused on Early Christian Spirituality.  I served as an intern at St. John's, New Haven, and learned new approaches to Outreach and Evangelism.  My passions are Outreach and Education, and so it was with joy in my heart that I answered the call to serve at St. Ann's in Sayville.  I have enjoyed getting to know everyone, particularly our youth, in my time here since July 2016.  I look forward to the years ahead, as we travel our earthly pilgrimage together, seeking and serving Christ wherever we encounter him.